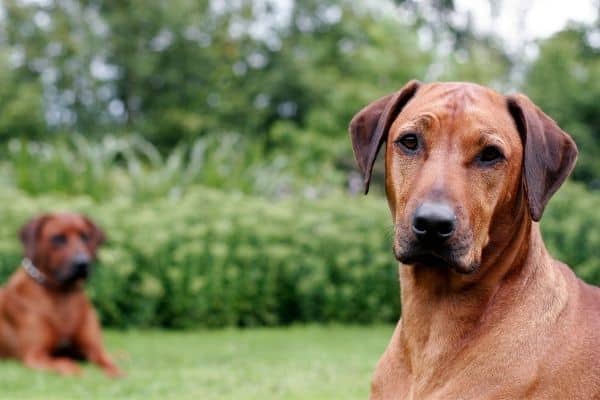 Have you made the decision to add a new furry friend to your family? Just as with humans, not all pups are the same.

Different dog breeds and even each gender is going to be more inclined to certain behaviors.

Now, while Rhodesian Ridgebacks may be more inclined to have the same behaviors as other big dogs, we can not stress enough that this is not the case every time. Any dog can potentially be an exception to a standing “rule.”

A Rhodesian Ridgeback is a great dog if you are looking for a larger breed. I have a Rhodesian-Lab mix named Major and he is the best dog I have ever had the pleasure of having in my life. Most sources including; https://www.dogtemperament.com, https://thehappypuppysite.com, and http://www.vetstreet.com/ will agree that they are:

As a hound dog, they can have a strong sense of independence. This can make them a little stubborn and potentially difficult to train. This breed is going to be looking for an alpha to follow, and if there is no one to lead, they will gladly take on the role.

Battle of the Sexes

There are a number of things to consider once you have selected a breed to help you determine if Fido would fit in your home better than Fifi. Look at the needs your family has and move from there.

While in many breeds, males are more athletic and outgoing, it seems to be the exact opposite when it comes to the Rhodesian Ridgeback. According to the writers and breeders at Ridge Back Puppies and Koda Rhodesian Ridgebacks, male pups tend to be more relaxed and “aloof”, while the fairer sex is more outgoing and headstrong.

Female Ridgebacks tend to be more independent in a sense that they will come to you for love but would want to do so only when they feel like it, and will want their own space. Males are more often little love bugs.

Rhodesians make excellent watchdogs, as they were originally working dogs used to protect hunters from lions by barking and lunging around, distracting the lion so the hunter could shoot. They are not known for being too vocal unless they need to be. So if your Rhodesian starts barking, it is best you take heed.

Because these hounds were bred for such an active lifestyle, it is important that they receive proper exercise – both genders will need no less than a half-hour per day.

As previously stated, a Rhodesian will take the leadership role. If there is no suitable alpha, females are more likely to take the lead over males. The males of this breed are more likely to take a secondary position in the pack. I have seen this first hand with Major. He oftentimes allows himself to be influenced and directed by my Pit-Mix female. He also took direction and warmed up to my female friends and I – much quicker than to my guy friends!

Because of their intelligence, both genders are easy to train (although there’s a lot of debate about which is easier to handle). Some may say that females may be easier to train because of their hyper-focus and drive. However, it is also believed that because of their strong sense of independence, a female may be more stubborn. On the other hand, male Rhodesians are thought to be too laid back to really care enough to be trained properly. They are also eager for affection from their human that they are more willing to follow direction.

Other Pets at Home

Another thing to consider when bringing home a new pet could be the other pets you might already have at home.

While it is always a great idea to spay and neuter your pets to prevent unwanted pregnancies, fixing your pets can also change unwanted behaviors in both genders. These behaviors may be potential factors to help when deciding whether to get a male or female Rhodesian Ridgeback.

Getting a new dog is a big decision. You might even find your hands full of different choices. Whatever happens, try your best to do your research first to find out which breed would be the perfect addition to your family.

Also, be sure to look for more information about the dog you want such as their:

The most important thing is to meet your potential new dog before you bring him or her home. Be sure you are getting your new friend from a reputable source to help ensure he or she is going to be healthy and more likely socialized. It is also important to finalize your decision by asking more questions like:

And finally, all dogs are different and each one is special. Remember that even a dog who is genetically likely to fit in your family may not be the right one for you.

Rhodesians are bred as predatory dogs; however, they are considered to be great family dogs. They are loving but can be a bit protective.

They do shed but only a small amount. They are short-haired dogs with dense coats. Indoor dogs will not go through seasonal shedding like one who is kept outdoors.

Can Rhodesian Ridgebacks be left alone?

Rhodesians don’t do well with loneliness and boredom. That’s why it is best to be sure they always have a companion.