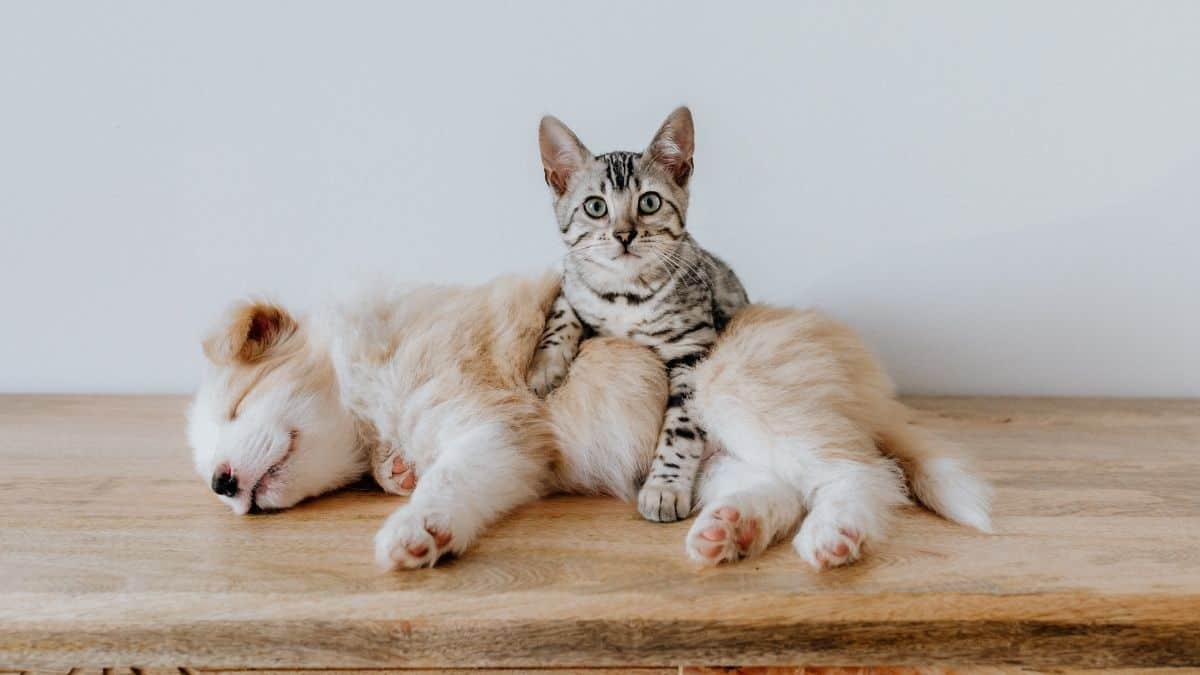 Cats are natural groomers. They love to not only groom themselves but other cats in their family as well. If you own a dog and a cat, your cat likely considers the dog family in the absence of other cats. Grooming is their way of showing love and affection to the dog.

Your cat licking your dog is actually a good sign because it means that the two animals accept each other. That creates a wholesome family.

Related post: How Often Should You Groom Your Cat?

What Does It Mean When Your Cat Grooms Your Dog?

Your feline is marking territory on the dog as part of their family by leaving saliva on Fido. Any other cat coming across your dog will know that they are taken and already belong to a pack. It is the same concept as when your cat licks your hair. It is a sign of affection and marking territory. The dog is your cat’s preferred peer.

Here are more reasons why your cat grooms your dog:

Female cats love to care for other pets. If your dog is young or a puppy, your feline may take to caring for it like it would its own kittens. This signals motherly affection and your cat is playing mum to the younger dog. It is also highly likely that your cat is very protective of her young charge.

Cats are solitary animals but when placed with other pets in the same house, they like to become members of the pack. So, to make a pack, they have to mark their territory on the animals allowed in the pack. Your dog is the next of kin to your cat and she/he wants to include the dog in the family. They lick the dog, leaving saliva which has the cat’s scent, on the dog. Any other feline in the area will be warned that the dog already belongs to a pack, signaling that they should leave it alone.

If your cat is an affectionate feline, they probably lick everyone in the house. That includes you, the dog, fellow cats and even your pet turtle if you have one around the house. In a household where there is only a dog and cat, the dog quickly becomes your feline’s favorite (and only) peer. So, they lick Fido because they love him/her. The dog is their best buddy.

Some cats lick the newest member of their family to welcome them into the home. If you get your dog when you already have a cat, the feline may tentatively lick the dog to indicate friendship and kinsmanship to the new family member. And if the dog responds positively, that could be the beginning of an extraordinary, lifelong friendship. It also indicates that you may have little to worry about when it comes to fights and animal aggression in your home. Dog grooming is a type of welcome committee.

It is actually not unusual for a cat to groom a dog.

Can Cats And Dogs Communicate With Each Other?

Dogs and cats may understand exactly what is said in a meow or a bark, but they can still communicate with each other in other ways.

Barring of teeth, moving away from each other or swatting at each other clearly communicates needing space. One animal doesn’t want the other to advance towards it for whatever reason. And that message is sent across loud and clear. You will notice the advancing animal will stop in its tracks as it decodes the other animal’s body language.

Also, cats and dogs tend to have similar characteristics which allow them to communicate with each other. They are both territorial, love packs and enjoy physical contact with humans and other pets. That makes it easier for them to understand certain boundaries with each other.

Why does my cat lick my dog’s ears?

As mentioned before, it is part of the process of showing affection or inviting the dog into the cat’s pack. But there is another reason:

Some cats love the taste of earwax. That is because earwax contains small deposits of cholesterol and fatty acids together with the dead cells. The cholesterol and fatty acids whet the appetite of the cat, making it want to eat. And a cat’s sense of smell is finely tuned to sniff out the scent of animal proteins. The brain receptors in the cat’s brain seek out things of nutritional value and their olfactory senses pick up the animal protein in the ear wax.

That is why, if you’ll notice, cats have the pinkest and cleanest ears. Because they are constantly licking each other’s ears.

How long does it take for a cat to get used to a dog?

Give your dog and cat at least three weeks to get used to each other’s presence. They need to get used to each other’s scents and behaviors. If they like each other, they will begin to bond as they realize that the other is not a threat. Scientists and animal experts have found that dogs and cats can develop loving and tender relationships. And considering that the American Veterinary Medical Association reports that 44% of American pet owners have a multi-pet household, with most having cats and dogs, there is incredible proof of this relationship.

With obedience training, your dog and cat learn to co-exist and there are fewer instances of chasing each other and aggression. And this can be achieved within a few weeks.

Is a dog a good companion for a cat?

Yes, a dog can be a wonderful companion to your cat. But you also need make sure that you get a compatible breed. Some breeds make better cat companions because they are sociable and affectionate. These breeds include:

These dogs are playful with a kind and gentle temperament. But breeds like terriers have a hunt and kill nature because they are hunting dogs. A moving cat may trigger their predatory instincts. Also, herding dogs that have learned to herd everything including the humans and cats in their pack may irritate your cat with their herding tendencies. Avoid them where possible.

How do I get my cat and dog to be friends?

It is very simple. Teach them obedience to you and to respect each other’s space. Dogs are usually the culprits of rambunctious behavior. They are the chasers of cats and other furry critters like squirrels and rabbits. So, train your dog not to chase the cat around.

Also, allow interaction between the two animals under your supervision until they learn to co-exist peacefully. And allow them the time to get used to each other’s scents.

Your cat and dog can live in harmony with each other. But you have to foster the relationship. It is okay for your cat to groom your dog. That is part of the family-building process. So don’t freak out when you or your dog are on the receiving end of your cat’s tongue lashing.

Nandika Amatieku Macharia is a journalist with over 15 years of experience and a dog lover. She lives in Nairobi, Kenya with her husband and two daughters. Nandika writes about dogs with inspiration from their Akita dogs, Simba and Chui.